Does Serverless make sense for a side project?

Command Challenge has been running for over 3 years now and I would consider it one of those “serverless” architectures. The front-end services requests using API Gateway and Lambda functions and commands are forwarded to a Docker executor running on a VM.

Overall, the costs have been minimal thanks to mostly low-ish traffic and keeping it inside the AWS free-tier limits. By “free-tier” I mean the “always-free” limits of an AWS account, since the 12 month trial period for new accounts expired quite some time ago.

Here is a 2020 update for the services that are used to run the site and a short explanation of what they do. 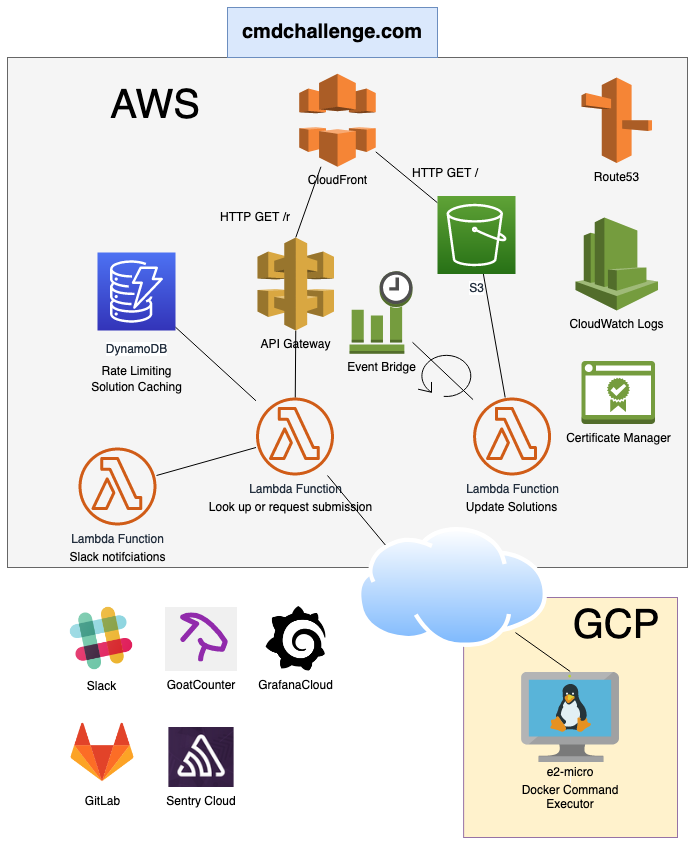 Where we could probably move all of this to a single VM and reduce some of the configuration complexity, I don’t think it would be any cheaper except on a shared hosting provider.

As you can see in the diagram, this project isn’t completely “serverless” because a server is required for executing user-submitted commands in Docker. For this, it’s a matter of finding the cheapest VM available for this type of workload.

Breakdown of a typical monthly bill

The production site uses an e2-micro instance costing around $6/month, this is a bit more than we need typically but it gives us some headroom when the site gets busy. There is only a single VM which is a single-point-of-failure for the site. This can cause a bit of disruption if there is a spontaneous reboot or if an upgrade is required. Thankfully, in GCP this is very fast, and thanks to the multiple-layers of caching (CloudFlare, DynamoDB) in the serverless stack, it only causes a problem for unique submissions that haven’t been seen before.

This architecture spans cloud providers to keep costs low as I found GCP gives a better value for the money on VMs compared to AWS at this lower tier. Here is a current-as-of-now overview of cheap VMs under $15 from the main cloud providers.

All of these are non-preemptable shared core instances or burst-rate limited in the case of AWS. This means that you cannot count on using the full CPU all of the time.

For now, the main site is powered by an e2-micro instance for $6/month. It offers 2 cores, which is more than the other options in the same price-range though it’s not uncommon to see stalls due to CPU steal:

It runs Container Optimized OS and only runs Docker and a Prometheus exporter for node metrics.

From a cost perspective for now I still think so. Of course there is always a risk that something happens where my cloud spend will spiral out of control but if this were to happen I would just shut it down. There is the meme “Wouldn’t it be easier to run this on a $5 DO droplet”? I think it might apply here, though the type of workload it runs is ideal for serverless because it is a single-page app where API Gateway requests are only required for submissions. This keeps the number of Lambda executions low.

Ignoring spend I think there are two big disadvantages to running servless. One is the complexity of gluing the cloud-native components together and keeping a configuration that is easy to manage and update. This is solved by keeping everything in a single terraform script, and though updates are automatically applied in CI I think there is a rather big initial investment in getting it to work properly.

The other, bigger reason I found is that it’s difficult, if not impossible to test everything locally, without a lot more work which would be my number one complaint about this setup. The way I have worked around this is to have an identical testing environment running in parallel, this actually doesn’t cost anything extra because it doesn’t get any usage beyond a small amount of testing.

To sum up, while it’s been fun for someone who enjoys doing infrastructure, I have been thinking about re-writing it all as a single server that run on a single VM, with sqlite as the db. I’m pretty sure it would perform better :)